We headed a few hours east of Bahia Blanca to a small town called Laprida where we met some seriously amazing people.

Ezequiel was about 12 when Taylor was on the mission, and although Taylor did not know him well, he was very excited that Taylor was visiting. He was great to show us around town, because he knew exactly where everyone lived that Taylor wanted to see- some that he otherwise would not have been able to.

It turned out that there was some miscommunication with the people that we were supposed to be staying with, but Ezequiel had introduced us to some church members that opened their home to us, John Cadeau and Silvina Suso. Their home was very small and humble, but they made us very comfortable- fixing a fantastic dinner, picking up a twin sized mattress from Silvina's mother, and renting a movie. The very best part was hearing their story. 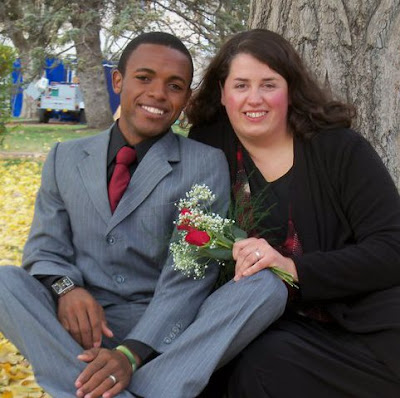 John was born in Haiti, but was raised by extended family in the Dominican Republic after his parents died when he was very young (he had the best Caribbean Spanish accent). He told us about how in the DR, if you don't marry by the time you are 20, you are old. Additionally, the men marry girls who are very young- 14 or 15. He served a mission there in the country, and after completing it he decided he did not want to marry his very young girl friend. At this point he was about 22. I'm pretty sure he said that he decided she was too immature (go figure).

Silvina Suso converted to the church while she was away for college. At 27, she served a mission in Salta which is in northern Argentina. She returned home from her mission to Laprida to find that the only attending members of the branch (congregation) was herself and Ezequiel. The Branch President was not even fully active, so they often could not have the sacrament. Understandably, this was a very frustrating situation for a recently returned missionary. She made a trip to the temple in Buenos Aires and "had a firm chat with God". She said that she needed a companion and basically one needed to be provided since there was nobody in Laprida. She joined an LDS singles website, saw John's profile and said "Hola desde Argentina." -hello from Argentina.

John responded with a hello and asked, "You are Mormon?"

Then seeing how old she was (he was 22ish and she was 29ish) he asked "Have you been married?"

She said no, but he still didn't believe her because of her age (remember the DR customs) so he asked, "Do you have any children?"

She said no, but he STILL wasn't sure he believed her. Then he asked, "Did you serve a mission?"

And when she said she had, he decided that she must be telling the truth about not being married or having children. Then he asked, "Are you a virgin?"

When she said yes, he said wahoo! He would go to Argentina!

His family thought he was completely crazy and did not think he was actually going to go through with it. He also told her to tell them she was only 4 years older than him instead of 7, because they couldn't handle that. They finally believed it when he sold everything he had and left.  He stayed with Silvina's mom while they dated, fasted, and prayed about marriage. And after 3 months, they were married!

They certainly look like an odd match, but they are SO happy together. Taylor and I both thought how amazing these two are! All they wanted was a companion who would live and cherish the Gospel with them, and they did it.

When they married, the Buenos Aires temple was closed for renovations and they could not afford to make the trip to the Uruguay temple. They have been married a little over a year and this month the temple reopens and they will be able to go and be sealed.

I honestly don't feel like I can even do their story complete justice. You had to meet them and see their life.

*as a side note for anyone curious, Ezequiel's mother started coming back to church and three other family members were baptized within the last year. This obviously helps the tiny Laprida branch, but the mission president said he would only reopen the mission if they have 10 members. They are close! For now they just meet together each Sunday and go through all the motions, and once a month they travel an hour to the Olivaria ward where there are lots of others and they have callings. They can't afford to travel every week. There are missionaries living in Olivaria that come down once a week or so to do work in Laprida.