Life at camp is awesome, to the max. However; day in and day out of entertaining 12 year old scouts can get a little boring. So to get a little more excitement we had to get creative. And thus "The Great bEGGS Race" was born. You see as commissioners we would arrive late to breakfast and thanks to the awesome kitchen girls we'd have some food set aside for us to eat. One morning Monte discovered to his horror that instead of a plate full of tasty pancakes, hash browns and fruits he had nothing but an entire tray full of bEGGS. Yup, that's right. All five normal food compartments of the tray were overflowing and then they even filled the silverware area. You might be wondering what bEGGS are. Allow me to explain. You see, eating normal eggs for breakfast was getting boring back somewhere in the midwest so they decided on a dare to just put all the eggs in a bag along with a bunch of noxious chemicals and eat them instead. Eggs + Bag + noxious chemicals= bEGGS. Anyway, back on track to the story, Monte was so appalled at his tray of bEGGS that we determined it would take a fool to eat that amount of bEGGS as it would surely end up in vomiting. The head cook, Dave Webb, then told us that since he cooks for 400 people every meal he always has tons left over. (better too many than not enough) It was at this moment when the idea to make a bEGGS eating competition was born. Monte and I took it upon ourselves to shameless promote this illegal event as if it were a prize fighting competition. We not only had an entry fee but we also decided that we'd put money up for the winner.

The challenge? To eat a full tray of bEGGS (2.0 lbs of bEGGS per tray, we actually weighed it, in all six compartments) in the fastest time and then to keep it down for at least 10 minutes. Now as if this didn't seem like it would be entertaining enough (right) then we also decided that the only drink they could drink was pure, unadulterated Tonic Water. (which we had left over from some evil weekend concoction) The trick was that once you drank even a little of your cup of Tonic Water to help wash down all those bEGGS you had to finish the whole cup and keep it down too for 10 minutes.

Now it's time we meet the contenders. May I introduce you to the 6 bravest (dumbest) souls we could find. First; we have Dish (real name:Brett Calkins). Weighing in at an impressive 120 lbs Dish has two mean older brothers who make his life miserable, a crappy job at camp (dishwasher), and a crazy desire to prove he can do anything better than washing dishes, even if that means eating an unholy amount of bEGGS. All this has earned Dish a reputation for being a man on the edge and a deadly contender.

Second; we have Phish (real name:Adam Calkins). Phish is Dish's older brother. A jumbo version of Dish if you will. Weighing in at 170 lbs Phish is the newest commissioner and the only one competing and representing our elite group in the bEGGS race so he wants to do well. Phish is from Coeur d'Alene, Idaho. But don't be fooled by that dignified sounding frenchy named city. Phish insisits that Idaho means business and that eating bEGGS will be a cinch.

Thirdly, we have T-bone (real name:T-bone?). T-bone doesn't mess around. No, really. T-bone doesn't mess around. Weighing in at 200+ lbs T-bone is the head dishwasher and is crazy disgruntled about being trapped in that awful place all day. He refers to himself as a "big mexican" and uses a giant aluminum disposable pan named "The Punisher" to do his dirty work. As the biggest contender, and since his new girlfriend was one of the onlookers, many thought T-bone would be the clear winner.

Fourth, there's Kye (real name:Kye Browning). Weighing in at 150 lbs and from the windy city, Chicago, Kai is ready for action. He's spending his one and only week away from the waterfront this week and is so excited not to be working when everyone else is I don't think he plans on taking this race too seriously. But the guy has one gigantic right pectoral, so don't mess. Period.

Fifth, there's the head cook Webb (real name:Dave Webb). Weighing in at 160 lbs Webb has the absolute worst job in camp. No seriously. He also boasts the amazing ability to eat very large quantities of one type of food, like the time he ate an entire tray of pudding or swallowed boiled eggs whole. Seem like a shoe-in for the winner? We'll see. 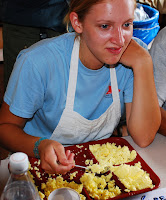 Lastly, and not to be underestimated is the Galley Girl (real name:Whitney), the only girl in the competition. Weighing in at... I don't even know, she really wants to win just because she's a girl. But she also sweeps the entire mess hall after each meal and mans the salad bar which has caused a silent rage to boil up inside of her which is ready to spill out in the bEGGS race.

So what happened? Everyone started out fast and furious but after eating the first compartment of the tray most everyone was reduced to whimpering and shaking their heads slowly as they were about to vomit. The only one to keep going ferociously was Webb. Webb dominated big time. The only other person to come even close was Phish. Webb even drank his Tonic Water. Bad idea. That was like cocking the gun. Poor Webb barely survived drinking the entire Liter of Tonic Water. The only casualty was Dish. Poor Dish was so sick he puked all over.
Posted by Taylor at 9:17 PM