I've always wondered where the notoriously craziest place for Halloween was. Until now that is. I've found it. Santa Barbara, or rather, Isla Vista, owns Halloween!! This cozy 1 mile X 1 mile area next to campus and the beach is where almost all the 20,000+ students live. 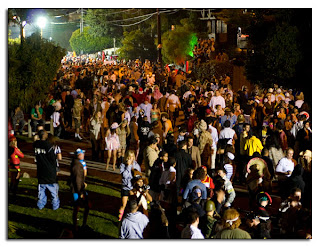 alone would be insane but add onto that 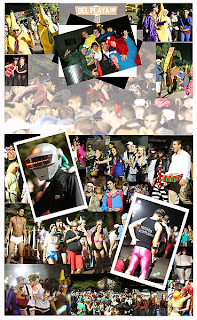 the 30,000 out of town visitors which come to I.V. like pilgrims towards some holy city. I can assure you that I.V. was no holy city. In fact we undertook it upon ourselves to discover just how crazy Del Playa Drive of Isla Vista is during Halloween. 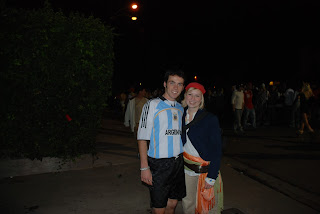 Armed with our extremely conservative costumes and a few friends we headed into the madness. To my surprise a whole lot of people yelled things when they saw the Argentine jersey, mostly good, with a few very bad. One passerby looked at Jodi and said, "Ooh, not only a pirate, but a naughty pirate!" um...okay. At one point Jodi realized "We're one of them! I thought it so insane that all these people would flock here, and now we're following the crowd." We had no idea what awaited us. 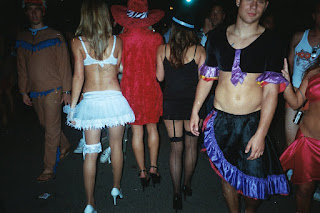 There were people EVERYWHERE! You couldn't even walk in lots of places. It was literally shoulder to shoulder for block after block. There was puke everywhere, riot cops on horseback, huge halogen lights illuminating the chaos... the wildest

costumes you could imagine like the giant blow-up penis, the naked dude except for a very poor underwear choice, huge throngs of spartans from the movie 300, tons of girls not even in costume but just walking around in a bra and panties, mario, smurfs, angels, hooters girls and much more. I even saw the Cingular bars go walking by. It was amazing. We walked through puke, got cat-called, saw many fights and arrests, and some girl dressed as wonder woman even grabbed my you-know-what as she walked past. Nothing quite as funny as seeing students who are normally so well behaved in class passed out on some random lawn. I don't dare embed a video because it's too crazy. But if you dare, you can check it out here.
Posted by Taylor at 11:49 PM