Our cool little apartment is surrounded by beautiful trees!

We discovered that Santa Barbara, with all of it's lush greenery, has it's share of critters. We had to get ants sprayed because apparently this place was built on an ancient indian anthill burial ground. They're everywhere! Also we found to our surprise that FROGS are all over the place! We found one the other day and it leaped into our house and provided quite the chase. (Who knew a little frog could be so hard to catch?) After he had peed all over my hands, refused to sit still for a picture and jumped and stuck to most of our furniture we caught him and let him go.

Let him go for a while that is. Just tonight he made a reappearance and Jodi KILLED the frog. Out of pure spite no less. 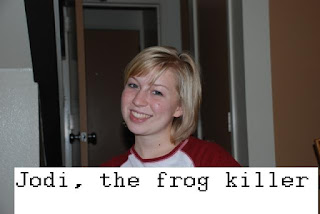