I just got back from doing my part in the "annual elder's quorum visits" where we go out and visit EVERYBODY that's on the church record at least once a year. This certainly didn't seem like it would be a very exciting evening but boy was I wrong...

You see, Santa Barbara, or rather, the Goleta Valley ward has some colorful members, and some even more colorful inactive members. Last year when they did this some old codger, who ironically enough lives on "Winchester Drive," got out his shotgun and started blasting away telling them to never come back!!

So we split up and took 6 or 7 names each. I set out with the Elder's Quorum President, Jason Earl, we went and did some visits. Some people would come to the door and tell us we don't want anything to do with your church anymore... blah blah blah. Others went for the more sly approach confirming that they were the same person on our list, but that they've never been baptized in our church, or at least they don't remember anyway. Others said they could offer money to the church yes, but time; no. A few peaked through the blinds at us, turned off the lights really fast and pretended they weren't home.

But my favorite was when we were looking for a guy named Felipe Radalto or something like that. We couldn't find his house so we tried the closest one next door. It went something like this...
*knock knock*
"Who's there?
*awkward silence as we decide what to say so as to not blow our cover* "Ummm... the Elders"
"WHO?"
"Ummm... Jason and Taylor"
"Oh, ok.... come on in"
"What?"
"Ya, just come on in!"
So what were we supposed to do? They must have thought we were some of their friends. I grabbed the doorknob and let myself in and immediately was overwhelmed with the smell of marijuana. I walked a few steps in the door and right next to me on a couch were two guys my age, each one had a GIGANTIC PURPLE BONG in his hands. We noticed what they had and we were rather surprised. As the awkwardness of the situation set in I realized I didn't quite know how to introduce ourselves... I finally clumsily asked if they knew the guy and they giggled something nonsensical and kept smoking their bongs. 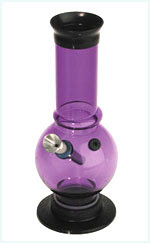