Did you know that once upon a time I could draw? On my mission I decided to start doodling a little bit in the little free time I had at night while I wrote in my journal. The first things I ever drew weren't very good at all, and the only things I could draw were xerox photocopies of pictures. I could never draw anything original so I hardly consider myself an artist, but rather an illustrator. I think the progression of skill is interesting to see though. Take a look if you like. Click the images to make them larger.

First drawing ever, the same as the "Venid y Ved" pamphlet we gave out to investigators. (I couldn't find the real image)

The Second Drawing I ever did. The famous picture that all missionaries had hanging around. My companion, Elder Ruarte, from La Rioja, Argentina asked if I would draw a picture of Christ for him, so I did and I kept a photocopy for myself.

Drawing #3. By this point one of my favorite missionaries of all time, Elder "Brown Out" Barrett asked me to draw a picture of him too. So I obliged. Though I don't have the exact one that I drew it from I think this one he has the same face. Again I only kept the photocopy and I gave him the original. 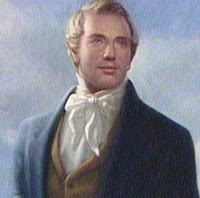 Drawing #4. I tried drawing the prophet Joseph Smith. The drawing ended up not so great, I mean that one eye has some serious issues, but subtle improvement is there.

Drawing #5. I was so pleased with how my last drawing went I tried drawing my favorite companion, the cowboy, Elder Neves, who I'd just finished training. Again I copied from a picture, but I added a bolo tie for good measure. (He was a championship steer wrestler) 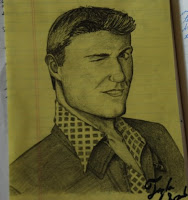 Drawing #6. Possibly my favorite. Here I drew my best friend, Andy Perkins. I found it was getting easier and easier.

Drawing #7. Shaun Conner and Adam Stevens. One of my best.

Drawing #8. The dreaded self portrait. It was honestly this picture that stopped me from ever drawing again. The only thing I got right was the teeth. The proportions and symmetry are all wrong. I was so disappointed with how it turned out that I haven't drawn anything since.

Jodi is an amazing artist, she's truly exceptional. I'll try and post some of her work. (Maybe Alicia could take a picture of her African Babies and send it to us). But the point is, that we are DONE with letting our talent go to waste. We decided that we are going to try and start drawing again, let's see what happens.
Posted by Taylor at 1:58 AM