We were lucky enough to have Jodi's brother Justin and his wife Lauren come visit us. We LOVE when family comes to visit us (hint hint). We had to be sure and show them a good time so where did we go? None other than Solvang, California's very own "Little Denmark" 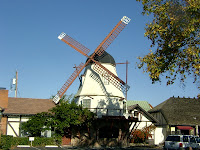 All the buildings are styled after Denmark. It's really beautiful actually, they have these big windmills all over and the buildings have the wooden trusses on the outside.

They have "danish days" going on right now and we were accompanied up with there by our good friends the Jeppesenees. whose name I'm never really quite sure how to spell. There's a lot of e's and s's.

Anyways, we were just enjoying the free apple cider, admiring the fancy old lady things and eating delicious pastries when all of the sudden what did we see? A dang festivus miracle that's what! We saw go dashing out of a subway restaurant two ninjas run across the street behind a building where they promptly bounced right up a tall brick wall and began to eat their lunches. Now, had the town not been known as "Little Denmark" but as "Little Ancient Japan" this would have seen normal, but come to think of it I don't know of any danish ninjas.

Intrigued, we followed these mystical ninjas to a nearby park where they danced on a gazebo and then did flying somersault jumps off into the grass. I was taking pictures shamelessly like a chinese tourist. At this point Jepesenn was getting embarrassed so to push him over the edge we walked up to the ninjas and got a picture with them.

They were very much obliged and even gave us some ninja candy afterwards. Turns out the ninja candy was just dum-dum sucker, no poison, no explosions, no smoke bombs to cover their tracks. They were pretty nice, maybe ninjas just get a bad rap.

Anyways, we showed Justin and Lauren the rest of Santa Barbara by taking the much more scenic route back into town (dropping down through San Marcos Pass.)

Thanks for visiting! Who knows what the next visit might bring... dinosaurs? time travel? Assassins?