I'm doomed to work in scouting for the rest of my life. In our last ward Jodi and I gave our introductory talks and I had to talk about working at Scout Camp and what happened a week later? We got called to be the Cubmasters in our ward. So we move to California and I waited until I had a calling already, two or three in fact, and then in my introductory speech I had to go and talk all about Scout Camp. Well, here I am the official new Assistant Scoutmaster in our ward. Go figure! I'm really excited though. I love scouts. I think I've even convinced our ward to let us go to Holcomb Valley for Summer Camp this summer! (one of my best friends happens to be the Camp Director there this year) 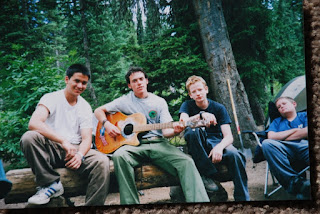 Here's a picture of your standard Scout Camp setting. The diehard staffer who has been living in the wilderness all summer and may or may not be nuts, the "adult leader" (white shirt left) who's barely 18 and acts like the boys, the kool-aid mustache 14 year old boy (blue shirt) and my favorite, the grungy unhappy child who wants to go home (far right, he actually did end up going home)


Here's a picture of when we hiked the entire Teton Crest in 1 day in four feet of snow (left to right; benihana, me, jonathan deveroux, wolverine) 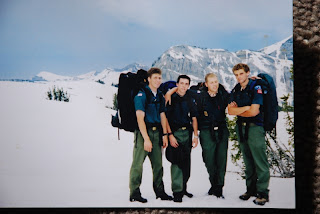 And another picture of me with Andy clear back in 2001 working up in Yellowstone. (The pictures doesn't show it, but we'd covered ourselves in Mouri War Tattoos using Huckleberries) 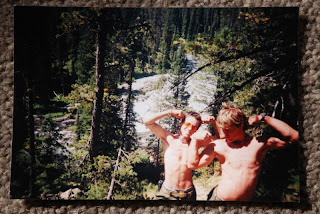