The Legend of Bill Dodge

While I'm on the scouting subject, I'll tell the sordid tale of when I first met my brother-in-law, Baby Aaron. Other than seeing baby aaron for a brief second when I came home from camp for a wedding I didn't really meet him until the end of the summer when my mom, my sister Michelle, Baby Aaron, and the very newly returned from his mission Miles came up to Camp Loll to pick me up. We set off past Flagg Ranch towards Teton Village. We arrived and our journey across the beautiful Teton Crest began. We started by getting the first 4000 feet for free using the Tram (Rest In Peace) . Then the hike really began.
Here's Milo and his vintage "1950's Signature Sport Series Bill Dodge Mountaineering Backpack." Remember this backpack, it will come into play later.

We were off to a great start. Miles had been walking many miles a day down in Texas where he served his mission and I had done more hiking over the course of the summer working at camp than any one human should, my mom had trained everyday by hiking up Adams canyon, michelle is iron woman and had just ran the Spud-man triathlon if I'm not mistaken... and baby Aaron... well... baby aaron has itsy bitsy little ankles on long long legs, so we were a little worried about "the dentist's" ability to keep up.
We got to the top of the first big ascent near Marion Lake and things were good. We made many awkward jokes about whether baby aaron should be in the pictures because we wanted to use these for christmas cards and that meant he would have to marry my sister.
Here's the married Christmas card version (ignore the giant black blob in the lower right corner)

We started the last pitch up to Marion Lake and then things started getting a little weird. All of the sudden it seems Bill Dodge, the backpack, was so happy to be out of Miles' parent's garage and into the woods that he actually started to possess Milo. My normally tough guy friend put on a pair of his mothers jeans (literally), tied a fancy little scarf around his neck and started smelling the abundant, waist-high flowers....

We passed Marion Lake and started over Fox Creek Pass with our first glimpse of the Tetons coming into view. Important to the story is what appears to be a tiny square speck of white labeled below in the picture as Axle Rose. This is not what it appears to be. Axle Rose is GIGANTIC while boulder. It's at least 30 feet high I'd say. And just beyond Axle Rose is where we set up camp for the first night.

As I had led the hike of the Tetons many times I knew that bear bagging was important and that no better place could be found on Fox Creek Pass to bear bag than on the face of Axle Rose. So we started cooking as the rain started coming down.

We hurried and ate and pitched our tents. Then we gather all our smelly items and food and got ready to bear bag them. But we needed a bag. With scouts I'd always just take the ugliest pack and make it the bear bag doomed to swing high above the cold night holding our delicous smelly food. In this particular excursion there was just no question, Bill Dodge had to go. Miles protested, but seriously, there was no question. The pack had to go. We tied the rope with a hangman's noose high upon Axle Rose and left him. The rain was really starting to come down now. We had two tents, one for the girls, and one for the boys. Poor baby aaron got stuck with Mile-style and myself. Now we had all settled in when all the sudden WHAM! lightning struck really close by. It must have been RIGHT OVERHEAD! The rain kept coming down, the night was pitch black and lightning had us all terrified. That's when Miles started to tell the story of Bill Dodge. You see his last owner had abused the backpack too and Bill Dodge, the backpack, had come to life and killed him. We thought to ourselves how angry Bill Dodge must be hanging there alone on Axle Rose in the nightmarish rain and black wind. Then the lightning started sounding further off and we were left with the uncomfortable quiet of the rain drizzling on the tent. That's when Miles first suspected that Bill Dodge wasn't actually hanging there anymore at all. He figured the pack had had enough and was coming for us. Eerily Miles recreated the sound that the pack must make as it crawls back the hundred yards to our tents. clank... drag.... clank.... drag... The sound getting closer and closer. More and more like metal on rock. Soon Miles started saying that the pack wouldn't kill us itself. Our imaginations went wild. Already my mom and Michelle were begging Miles to shut up and not talk about it. But we couldn't stop now. We imagined how all the sudden the door of the tent would tear open and the person in the middle would be sucked out into the black night like a spaghetti noodle. Then Miles suggested that it would possess him to avenge the betrayal. Mom and Michelle in the tent next to us were already singing Primary songs at this point out of terror but Miles continued. Finally when my mom was crying we stopped but the damage was done. The terror was in all of us. Me and Miles included. We all sat still in the uneasy silence imagining the tell tale sound clank... drag...
Baby aaron woke up at one point in the night to adjust something or to go to the bathroom and I shoved my body halfway into his bag onto his comfortable pad. He was already frieked out because of Bill Dodge and his girlfriend's little brother spooning him all night but he didn't quite know what to make of this. I was doing all I could not to start laughing. He carefully tried to move me thinking I was still asleep. He pushed and pulled and finally just shoved me out of the bag. After a very long night morning finally came. To our horror Bill Dodge had an accident. The details are fuzzy. Some say he fell that morning when Michelle and baby aaron tried to take him down. I think it was more sinister than that. I think it was murder. Bill Dodge was dropped! He fell and exploded into a million pieces. Literally.

At this point, Miles was fully possessed with Bill Dodge's vengeful spirit. Baby aaron tried to make himself not look like a killer did his best to stich poor Bill Dodge up using dental floss. Literally. But poor Bill Dodge was no more. The pack had exploded, it wasn't good for anything but a trash bag now. The problem was that Miles had been carrying a lot of the heavy gear, so we took all the heavy stuff and redistributed it and made Miles carry mom's now heavy pack and made mom wear the pack of shame, Bill Dodge, the garbage pack.

The Tetons are beautiful. My favorite is how they name things such manly names. Arrowhead Peak, Battleship Mountain, The Death Shelf, Death Canyon, The Devils Stairs, Static Peak, Hurricane Pass, Alaska Basin and then amidst all the tough guy names they put in a few sissy ones like Marion Lake, Sunset Lake, and Paintbrush Canyon. Here's me on the Death Shelf.

And the Death Canyon... 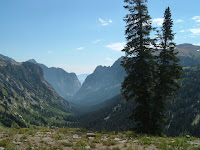 The rain really unleashed all it's fury on us once we got to Sunset Lake. We bear bagged, but it was raining so bad at that point that we did a pretty crappy job and it was really more like a bear piñata. I mean, it was all of 5 feet off the ground. Anyways, it rained like 15 hours straight. It was torture! We were all miserable. Baby Aaron fought the rain vigilantly, trying to keep his girlfriend dry, the rest of us just accepted the fact that we would be in the cold, freezing, wet tent for 15 hours. Finally the rain stopped and we faced hurricane pass. Here we are, I'm particularly fond of baby Aaron's shorts over sweats look, very Sherpa.

Many long miles and blistered feet later we survived the Hurricane Pass and we hiked right under the Grand itself. 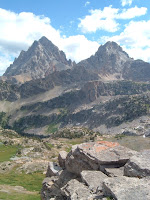 We then loved the hike down beautiful Cascade Canyon into Jenny Lake where we finally ended the ordeal.

I can't believe baby aaron didn't disappear for good after the terrifying ordeal. Seriously. He must have been meant to be part of the family to survive such an experience.
Posted by Taylor at 5:46 PM