I'm sad to say goodbye to Andy, JD and Dan. They're continuing up to stay with Michelle in San Francisco.

I am happy to announce we did everything under the sun (and stars) practically. We started out going to the Catholic Mission. This thing was originally built in 1786. That's right, you read correctly, this baby is only 10 years younger than our country! It was really cool. 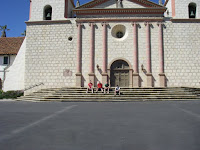 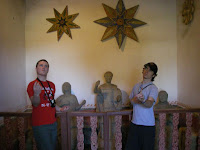 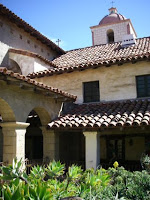 It had cool fountains, towers, courtyards, mausoleums and graveyards... 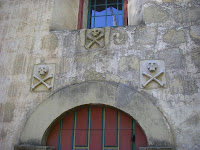 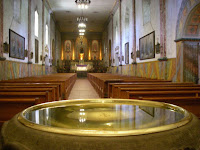 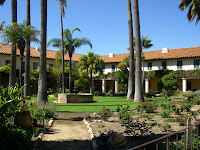 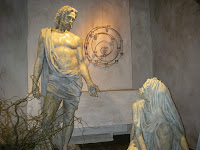 Can anybody explain those skulls? I find dark, old Catholic churches just a little bit creepy.

that afternoon we went surfing. 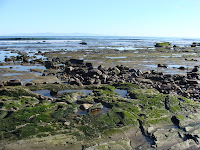 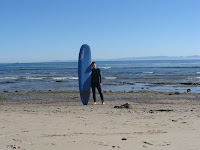 The waves were pretty small but we had a great time. The sun was really hot and the water was just barely cold enough that you needed a wet suit. We had a blast surfing. Even though the board was a behemoth 8 or 9 foot foam "Wavestorm." 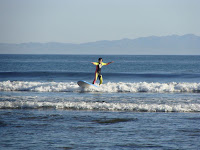 I'd say the best part was the looks I got in my hot pink and yellow wetsuit. 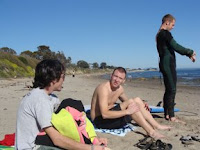 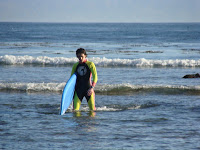 Since the boys all brought their longboards I grabbed my somewhat neglected skateboard decided to take them on a skating tour of Isla Vista and UCSB on a saturday night. 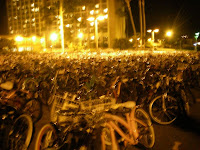 (more bikes than you've ever seen)
It was a blast. Even though we're only a week before Finals there were of course beer-pong games going on, loud music and wild wild parties all along Del Playa. On the way back we saw countless guys wearing grass skirts made out of cardboard strips from beer boxes and every girl we saw was only wearing police "Caution Tape." Why? Because it's I.V.

anyways, the night before they left we decided to take one last trip to the beach on our boards. When we got there and it was so dark we didn't see anyone around and so we decided to experience the ocean the way man was intended. wink wink. So we did so and screamed like girls every time a wave pushed the water higher as we walked out. After we got out we ran screaming down the beach and on the way back I walked a little further in on the dry sand. I walked past what I had thought was a tree stump right by where we had abandoned our swim trunks and saw that the tree stump was playing guitar... hmmm.. odd.... Boy were we all embarrassed. Andy went over to him and apologized in his best Ulysses Everett Mcgill voice and the guy just laughed. Good times.
Posted by Taylor at 3:21 PM